What is GoPuff and how did they disrupt the convenience store industry? In this guide, we’ll explain how GoPuff was started, how GoPuff works, how GoPuff makes money, and how it became a billion-dollar business.

GoPuff started as a delivery service run by students for students. In little more than a decade, it’s grown into a multi-billion dollar business servicing over 1000 cities.

How did GoPuff get off the ground, and what steps did its student founders take to build it into a delivery unicorn?

Let’s break down GoPuff and discover how it all started, where the early growth came from, what the future holds, and what three lessons you can learn from its rapid growth.

GoPuff is an on-demand delivery service that offers a range of consumer goods. The company mainly sells snacks, drinks, and essentials that you would usually pick up from a convenience store. This includes things like cleaning supplies, baby items, school supplies, toilet paper, over-the-counter medications, pet food, and even a beer delivery service.

Basically GoPuff stocks all the usual household goods you would normally find in convenience stores and makes this accessible through an app. They have their own delivery services that fulfill an order as soon as a customer places it.

At the time of writing this article, GoPuff operates in over 1000 US and EU cities, with plans for further expansion, both nationally and globally. 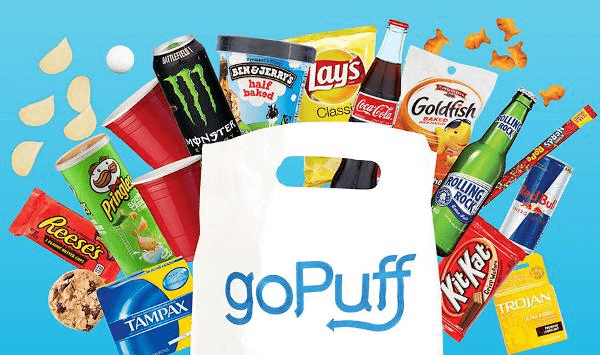 How Does GoPuff Work?

GoPuff’s business model is not like other delivery services. The company owns its own warehouses, where it stocks products and fulfills on-demand orders.

Customers can download the GoPuff app, where they can browse a wide range of products. These are the kinds of products you would find in grocery stores.

When a customer places an order, a GoPuff driver collects the order from the nearest fulfillment center and instantly delivers it to the customer. In many areas, GoPuff is available 24/7. In other areas, the service remains open for late-night delivery.

The company’s thousands of locations are supported by approximately hundreds of micro fulfillment centers. The app and delivery service is changing the way the convenience store industry operates.

GoPuff’s story starts in 2011 when its founders, Rafael Ilishayev and Yakir Gola, met in a Business 101 class at Philadelphia’s Drexel University.

Thanks to similar backgrounds, the two instantly became friends and then roommates. Both were children of immigrants and had worked in their family business.

Gola was lucky enough to have a car in college. but because none of his friends had cars, he ended up doing the late-night runs to grab snacks when the munchies hit.

After another late-night run with Ilishayev tagging along, they thought there had to be a better way to get stuff from convenience stores. They figured if people are already getting take-out delivered, why couldn’t they do the same with convenience goods?

Excited by the idea, they shared it with their friends and family, but none of them thought it made sense. They all said they’d rather go to a convenience store than order from an app.

But the two decided to push on with their idea. They figured that there were tons of college students like them that would much rather get their late-night snacks delivered than make the trip to the store themselves.

They targeted the pot and tobacco smokers looking for hookahs, vaporizers, grinders, and rolling papers. They even had eye drops and a selection of snacks available, with delivery ending at 4:20 AM.

GoPuff officially launched in 2013 from Philadelphia, Pennsylvania. They initially targeted university students, with the founders themselves making deliveries.

They soon found out that their idea worked, but the two college student founders faced several challenges growing the company. These included financing, developing the app, acquiring users, buying stock, and organizing the actual deliveries.

To fund GoPuff, the two took every opportunity they could. While looking for furniture, a family friend gave them what was left in their old office building. They kept what they needed and sold the rest of the office furniture on Craigslist for a total of $60,000.

This was enough for them to buy some inventory, rent a warehouse, and pay the Ukrainian programmers they’d hired to build the app.

To get students to try their service, the duo convinced professors to let them pitch the app to students before classes. They also handed out branded bottle openers, lighters, and magnets.

Since they didn’t have much money, Ilishayev and Gola had to convince suppliers to let them buy stock on credit. This was tough considering they were a new business with no credit history. One trick they used to do this was to exaggerate the size of the customer base.

They also couldn’t afford delivery drivers. So for the first six months, they ran all deliveries themselves. They also handled all other aspects of the business like orders, inventory marketing, bookkeeping, and customer service.

During this time, they worked for 16-hours at a time, seven days a week. Sometimes they’d even have to leave class to make a delivery. 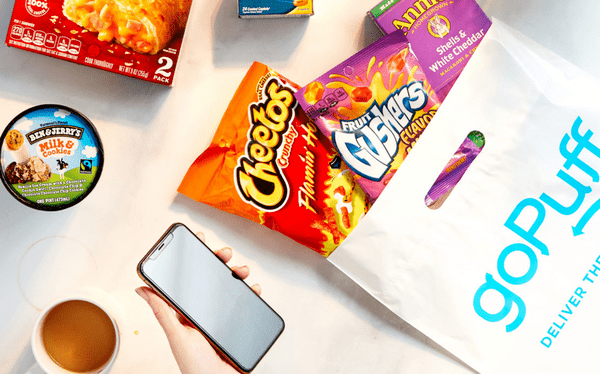 In 2014, the GoPuff founders decided to move away from focusing on stoners and students. Instead, they turned themselves into an on-demand convenience store.

As part of this pivot, they moved away from the raunchy marketing strategy. This included half-naked women on their website and ads like “Who’s getting LAYS tonight?” or “Delivery when the bra is off, but the munchies are on.”

As a result, their average customer’s age was boosted from 18-22 to 25-34. This helped them cater to a wider range of people.

The following year, while still seniors, they expanded to campuses in Boston, Washington, D.C., and Austin. This was tough because they were bootstrapping the company and only had enough cash for the bare minimum.

They even resorted to sleeping in their GoPuff warehouses instead of shelling out for hotel rooms to save cash. This dedication to their business worked. Within that year, they completed a staggering 500,000 orders in nine major cities.

When trying to open a new GoPuff location, three factors affect the launch. They need to rent a micro fulfillment center, hire drivers, and get the area’s suppliers on board. If one of these pieces isn’t there, the whole thing falls apart.

Even then, not all cities work out. When they tried to expand to New York in 2015, they only lasted two years because of high property prices and other good late-night options.

How Does GoPuff Make Money?

GoPuff makes money by satisfying what it calls “instant needs.”

GoPuff gets its money by heavily marking up its products. The platform may be a lot easier than convenience stores, but it’s also more expensive. More recently, GoPuff also makes money by selling better placement on its app.

Thanks partly to the pandemic, GoPuff earned $1 billion of revenue in 2021, three times the amount made in 2020.

Still, the company isn’t exactly profitable. While it claims it’s profitable in all markets where it‘s been operating for at least eighteen months, a quarter of its centers aren’t making any profit.

But Ilishayev and Gola credit this to their high spending to manage GoPuffs hypergrowth. A lot is spent on automation, routing software, and other technology to help pack and deliver orders more efficiently. According to them, if they weren’t investing in growth, they’d be profitable right away.

But GoPuff isn’t the only delivery service that’s not making a profit. UberEats, DoorDash, and Grubhub aren’t turning a profit either, and none of them have the added costs of operating running micro fulfillment centers.

Another part of GoPuff’s spending is on acquisitions. GoPuff owns liquor chains, delivery services to help its international expansion, and a software company.

GoPuff funded all this spending with the $3.4 billion it’s raised over nine rounds, with its latest $1 billion funding round of July 2021 valued it a massive $15 billion.

What’s Next for GoPuff?

Looking to the future, GoPuff wants to continue its expansion into the UK and Europe.

According to reports, GoPuff is in talks to acquire Berlin-based delivery service Flink to take on the big German delivery service, Gorillas. Turkey’s Getir is another big European player it’ll have to take on, along with smaller ones like Weezy, Jiffy, and Deliveroo.

GoPuff is also adding more products to its lineup, including healthy snacks, beauty and baby categories, and Curated Mystery Boxes.

Finally, GoPuff is planning to open a store in San Francisco. Here shoppers will use digital terminals to place their orders. Workers then pick those orders from a product storage area that also services online orders and bring them out to the customer.

GoPuff went from a college student delivery hustle to becoming a billion-dollar business. There are GoPuff locations all over the US, with plans to grow globally. GoPuff owns subsidiary companies and offers everything from alcohol delivery to a phone charger.

Here are three lessons we can learn from GoPuff’s amazing story.

Lesson One: See Solutions, Not Problems

Two college students discovered a problem through their experiences of late-night snack trips. Instead of dismissing the problem, they came up with a solution to fix it. This is entrepreneurship 101.

Even though the two GoPuff founders’ friends and families didn’t think their plan would work they stuck with their plan. This soon paid off.

GoPuff continues to innovate and stand out from the stiff competition, something its been doing since the early days. GoPuff world differently from other delivery services. They market themselves differently and win over consumers through their unique offering.

GoPuff started by targeting college students and soon grew its customers to a far larger audience. The company has shown adaptability throughout its journey, and it continues to adapt its warehouses, strategy, operating locations, and more to better match consumers.

While GoPuff started with a great idea, it was the founders’ flexibility that helped the company really take off.

GoPuff started because two college juniors thought there should be an easier way to get late-night snacks and smoking supplies. Little did they know that this idea would have morphed into a $15 billion delivery unicorn offering everything from diapers to beer just over ten years later.

It’s an inspiring story that shows you just how powerful a simple idea can be. Will GoPuff be the future of convenience stores? And what will their global expansion look like? Only time will tell for this exciting company.

Assure Your Family’s Well Being With Income Protection Insurance